Tinytag data loggers are used in meteorological research to identify the coldest places in Switzerland. 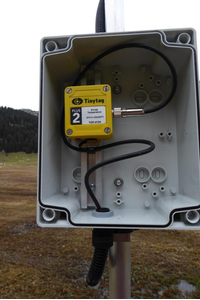 Researcher Stephan Vogt is using Tinytag data loggers to identify the coldest places in Switzerland, which contrary to popular opinion are not recorded on the highest mountains! Stephan, who has an Earth Sciences Master's Degree from the Swiss Federal Institute of Technology, works for the National Weather Service. In his spare time he is working on this private project, attempting to locate the coldest areas which are to be found in closed geological depressions called sinkholes or dolines, where cold air can become trapped.

Sinkholes with gentle surrounding slopes, fresh snow cover, air masses of arctic or polar origin, a clear sky and no wind are needed for the perfect situation: under these conditions temperature can drop 20 to 30°C within a few hours during the night. In these cases temperatures in a sinkhole can be 20°C to 35°C (under extreme conditions) lower than at the same altitude in the free atmosphere: a so-called inversion is formed.

The coldest measured temperature at an official station in Switzerland is -41.8 °C in La Brévine (a village in the Jura Mountains close to the French border, (elevation 1040m); an unofficial measurement of -52.5 °C exists from Glattalp (1860m) in central Switzerland but Stephan believes this is not the end of the story! He aims to use Tinytags to continuously monitor in sinkholes which have been identified as the most promising for experiencing extreme cold temperatures. In each doline, a monitoring station is placed as close to the lowest point as possible (where the lowest temperature occurs) and an additional station is situated at the upper rim in order to determine the strength of the inversion (deviation to the conditions outside of the doline).

Since April and November 2016 respectively, two first sinkholes have been equipped with monitoring stations which incorporate robust Tinytag Plus 2 TGP-4104 data loggers with an accompanying PT100 probe, housed in an actively ventilated radiation shield. The stations are set up to closely meet the requirements of the World Meteorological Organisation. One is the depression of Lake Sämtis (1209m) and one the sinkhole of Alp Hintergräppelen (1286m) in the Alpstein Mountains in north eastern Switzerland.

Readings are taken every ten minutes, and the data downloaded every 75 days. The stations at the upper rim of each doline are equipped with Tinytag Talk 2 TK-4023 data loggers set to record every 20 minutes, and housed in a passive ventilated radiation shield. These stations in the two dolines are prototypes in order to gain experience, the really interesting candidates are yet to come!

Specifically, the recorded information will help to identify the coldest temperatures and highest temperatures. This allows Stephan to derive what amplitude can occur within one day and how fast temperature can fall or rise. In addition, it will identify how many ice days and frost days occur.

Results of the monitoring are recorded in a database for analysis and presented online at https://kaltluftseen.ch The results are shared with cold air pool enthusiasts from all over Europe including universities.

Stephan comments, "I was looking for a temperature recording solution which works under extreme conditions: temperatures of under -40 °C can occur and an IP68 rating is needed in the dolines since flooding is possible. Tinytag data loggers provide a good combination of accuracy, functional efficiency, ruggedness at low temperatures and cost. I'm looking forward to reaching the limits of the Tinytags' specifications!"

The image shows a close-up of the Hintergräppelen monitoring station (rights reserved).

The file shows an example of a standard monthly summary graph for each cold air pool: it shows the values for Hintergräppelen frost hollow for January 2017 where an astonishing -38.2 °C was recorded in the night from January 6th to January 7th (rights reserved).