Rugged Tinytag data loggers record environmental conditions to aid in the conservation of historic and reproduction furniture, furnishings and fittings. 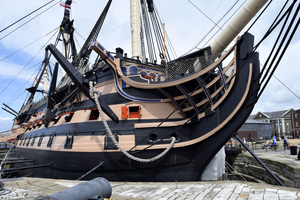 Admiral Lord Nelson's flagship HMS Victory at Portsmouth Historic Dockyard attracts thousands of visitors every year. The famous ship is currently undergoing a long term conservation programme to repair and maintain the structure and improve the system of supports within its dry dock.

Alongside this work, Historic Ships Conservator Diana McCormack is responsible for the care of a wide range of both original and reproduction items in the ship's interior. This includes furniture, as well as floor coverings, bed linen, drapes and even ropes - all made from natural fibres which are vulnerable to changes in temperature and relative humidity. The items are located in a number of key areas including the Great Cabin (Nelson's State Room), the forward gunnery store, and the crew space on the lower gun deck.

If left unchecked, environmental conditions within the ship could play a part in deterioration through factors such as damp, mildew, mould, fungus and pests. The conditions experienced vary from area to area and include wide fluctuations in temperature ranges throughout the year; lack of natural ventilation/throughflow of air in some areas, especially on the lower decks, and high humidity levels.

Data recorded by the rugged Tinytag Plus 2 data loggers is providing important information about these environmental conditions. For example, the data shows that a dehumidifier in the ship (installed as a test run) is keeping the area it services consistently 10-12% drier than the rest of the orlop deck, and also that the heating used in the Great Cabin was causing the humidity to drop too low, potentially damaging to the timber fabric and furniture. As a result, humidistats have been installed on the heating in the Great Cabin and work can progress on identifying where extra dehumidifiers in the ship should be targeted.

Diana is also using Tinytags in HMS M.33, the sole remaining British veteran of the Dardanelles Campaign of 1915-1916 and the Russian Civil War, and one of just three British warships from World War I still in existence. The metal hull means that interior temperatures fluctuate hugely throughout the year (from a high of 51°C in the summer to -5°C in the winter) leading to potential problems of overheating, condensation and damp.

Find out how to use Tinytag data loggers in museums, galleries and archives.