Tinytag data loggers have been used for monitoring temperature and humidity in honeybee hives under field conditions in the UK.

The data loggers were used in a small scale experiment to record temperature and humidity of air exiting a beehive as part of conservation research. 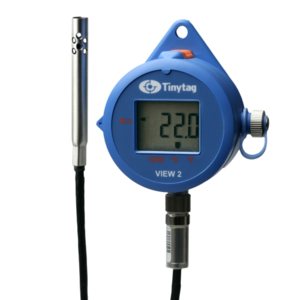 Dr John Feltwell is a professional environmental consultant, author, and founder of the 'Wildlife Matters' organisation which furthers the work of conservation. Wildlife Matters seeks to integrate the welfare of flora, fauna and habitats into today's countryside structure, to uphold the conservation of wildlife through the application of UK, EU and International Law, and to enhance the environment in all cases.

Dr Feltwell used the Tinytags to monitor the temperature and humidity of air exiting a beehive in his East Sussex garden from August 2009 to March 2010. A Tinytag View 2 data logger with a probe was placed on the metal gauze covering a hole in the crown board of the honeybee colony. Every 30 minutes, the logger took temperature and humidity readings from the air passing through this gap immediately above the honeybee cluster. Most of the warm and humid air emanating from the bees had to pass through this hole, so it was an ideal monitoring location.

Key results obtained showed that humidity levels in the hive were higher (peaking at 97.5% RH) than expected, based on previous research under laboratory conditions. The higher humidity levels were probably due to the closed nature of the bee hive subject to outside weather conditions. The average temperature in the hive was at least 10°C lower than in similar laboratory-based research.

By way of a control, a robust outdoor Tinytag Plus 2 data logger was secured to a nearby fence post at 2m above the ground. Comparison of the data in and outside the hive provided some interesting results.
For instance, in October 2009 the minimum temperature in the hive was close to 30°C yet outside it went down to 3.6°C. Results showed that the honeybees maintained their temperature several degrees above the ambient temperature.

This research appears to be the first time that Tinytags have been used for the measurement of conditions inside bee hives under field conditions. The results indicate that the temperatures appear to be lower and relative humidity higher inside the beehive over the study period than in similar studies under laboratory conditions.

Browse our Tinytag range of data loggers and choose the one that best suits your application.