Tinytag Plus 2 temperature data loggers have been used to investigate methods of combating the effects of climate change on sea turtle populations in the Caribbean.

Two experiments were conducted by the Department of Biosciences at Swansea University to investigate the potential of using low-cost, low-technology techniques to mitigate the effects of increasing sand temperatures in the nesting locations of three turtle populations in St. Eustatius. 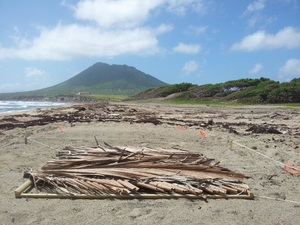 Assessing the effects of climate change on sea turtle populations has been identified as a top global research priority for enabling the future conservation of sea turtles. Sea turtles experience a phenomenon known as temperature-dependent sex determination - that is, the sex of the turtle is determined by the temperature at which the egg is incubated. For sea turtles, females are produced at higher temperatures, and with global temperature expected to increase by at least 2.6°C by 2100, it is estimated that the primary sex ratio in the sea turtle populations at St Eustatius would be close to 100% female by the end of the century. Finding ways to reduce the effects of increasing temperatures is therefore imperative to the survival of the species.

The researchers utilised 24 Tinytag Plus 2 TGP-4017 data loggers to measure sand temperature on two different beaches, placing the loggers at depths which were representative of turtle nests. Dr Nicole Esteban, Lecturer in Marine Biology at Swansea University, comments on her experience using Tinytags:

"We always use Tinytag data loggers for our monitoring of temperatures as tried and tested technology in extreme environments, whether it is under the sand or in the sea. We know that we can leave programmed temperature loggers in beaches at 70 cm depth for 2 years and rely on the calibrated loggers recording temperature accurately in line with program set-up - usually measuring temperatures every hour or once every 4 hours."

Palm leaves were used as the artificial shade in the second experiment, which took place over a 46-day period and aimed to assess how sand temperature was affected by three different factors: beach, level of shade and sand depth. The results found that sand temperature on Oranjebaai Beach was approximately 2.0°C higher than that on Zeelandia Beach, and that the plots which were artificially shaded with palm leaves were approximately 0.60 degrees cooler than the control plots. Sand depth showed no visible effect on sand temperatures.

The findings from both experiments show an optimistic outlook for the successful conservation of sea turtle populations. Implementing mitigation strategies such as relocating nests from Oranjebaai to Zeelandia Beach and shading nests with palm leaves would positively affect sex ratios: the report estimates that a decrease of 2.5°C would reduce female-bias to 4-7% in January to March and 60-90% in June to August, meaning that low-cost and low-interference conservation of sea turtles is certainly viable.

With incubation temperatures predicted to rise by up to 4°C over the next century at St. Eustatius, such low-cost, low-technology mitigation strategies, as those proposed by the researchers at Swansea University, may prove crucial to ensuring the future conservation of sea turtle populations.

Read the report in full and more about Dr Nicole Esteban's research here.