Trials in Australia of the Team’s entry for the Bridgestone World Solar Challenge included using a Tinytag data logger to provide valuable performance data with regard to temperature fluctuations, to help optimise the vehicle design. 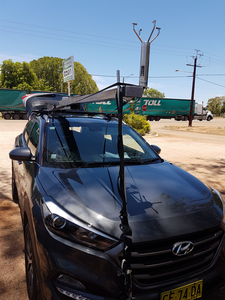 Solar Team Great Britain is building a solar-powered car to compete in the Bridgestone World Solar Challenge in October 2017. Racing across Australia from Darwin to Adelaide, a distance of just over 3000km, the Team hopes to demonstrate the very best of British engineering and innovation. Throughout this process, the Team wishes to inspire students and young professionals to apply their talents to sustainability.

The car has been entered into the Cruiser Class; this focusses on making further progress in the development of a road-legal family sized solar powered car which can carry upto four passengers. The end goal is to reach the end of the course with the most passengers but with the lowest amount of initial energy. The Challenge takes place over five days, with a defined 3 hour window for the final time of arrival.

The Tinytag Plus 2 data logger with two thermistor probes was among a large amount of measuring and monitoring equipment used on the trial, which will help the Team to prepare a computer model to optimise the car's design. The Tinytag data was particularly important as the silicone solar panels used are temperature sensitive - if they get too hot for example, they stop performing as effectively.

The recorded data illustrated how the temperature varied at different speeds, and with different amounts of insulation. The temperature curve showed how the performance of the insulation is extremely dependent on the speed of the car. In addition, the data has been passed to the Team's battery supplier to illustrate the worst case temperature scenarios that can be expected, so this can be taken into consideration for design and manufacture.

The image shows the car used in the trial for gathering data - this information will help shape the design of the actual vehicle entered in the Challenge.

The graph shows how leaving the car parked in direct sunlight over a lunch stop resulted in a major spike above ambient temperature.