Rugged Tinytag Plus 2 data loggers have been deployed in the natural and artificial habitats of the Black-headed Bushmaster to gather data that will inform and encourage the breeding of the species.

Deforestation and habitat destruction present major threats to the Black-headed Bushmaster, but it is thanks to conservation work, using temperature and humidity data loggers, and dedicated ecological parks that the bushmaster continues to thrive both in its natural rainforest habitat and in captivity. 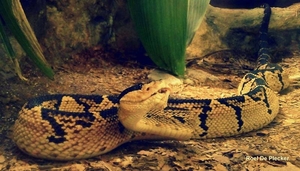 One of the World's largest pitvipers, the venomous Black-headed Bushmaster (Lachesis melanocephala) is a snake native to the Southern Pacific rainforest of Costa Rica. The bushmaster is classed as a 'vulnerable' species - meaning that it could become endangered in the future. Deforestation and habitat destruction present major threats to the bushmaster, but it is thanks to conservation work and dedicated ecological parks that the bushmaster continues to thrive both in its natural rainforest habitat and in captivity. One of the ways that the species can be encouraged to survive is by simulating its natural habitat in captivity; this promotes the welfare of the specimens and, crucially, encourages breeding.

Roel De Plecker is a Curator at Parque Reptilandia, a reptile park on Costa Rica's southern Pacific coast with 90 species of reptile under its care, including the Black-headed Bushmaster. Roel's special interest is the Bushmaster, and his most recent work has been to investigate the conditions in their natural rainforest habitat and in their semi-natural vivarium at Parque Reptilandia in order to gather information that will help to encourage the breeding of the species.

Roel has been using two Tinytag Plus 2 TGP-4500 data loggers to measure temperature and humidity levels in the bushmasters' different habitats. One data logger was deployed in the primary rainforest near Ecotouristico La Tarde (an off-the-grid Eco Lodge), the bushmaster's natural habitat, while the other was situated in the bushmaster's vivarium at Parque Reptilandia. The aim of monitoring was to compare the average temperature and relative humidity levels between the two areas to assess how effectively the park's vivarium simulates the pitviper's natural experience.

Tinytag Plus 2 data loggers were chosen for the project because they are robust and waterproof, meaning that they can withstand the conditions of the tropical climate. In order to afford the logger in the rainforest extra protection, a case was fashioned to cover it. The logger was fastened to a tree in a square Ziploc container so that the sensor of the logger would not be exposed to direct rainfall. An extra covering was placed over the container to prevent animals from tampering with the logger.

Roel was pleased with how the Tinytags performed in the intense climate, commenting that "Tinytag data loggers are accurate and robust devices which provided us with important information on temperature and humidity in some of the most preserved areas of the tropical rainforest." User-configurable logging intervals and long battery life also proved to be an advantage, as the loggers could be left in the field year-round, taking measurements every hour, to create a comprehensive profile of the natural environment that bushmasters inhabit.

Now armed with the data from the Tinytags, the Parque is endeavouring to improve the conditions that their Black-headed Bushmasters experience and encourage their breeding. The work on breeding bushmasters and the data gathered from the Tinytag data loggers was published in March 2020 in Herpetological Review under the title 'First Breeding of the Black-headed Bushmaster (Lachesis melanocephala) in Costa Rica'.

It is hoped that the published data will help to increase understanding of the natural and artificial surroundings of the species and to inform others on how to better keep and breed the species in captivity. You can read the full article here.

For the latest information on the conservation of the Black-headed Bushmaster, please visit the Plato Negro Ecology and Conservation project website.