The loggers were left to record the temperature of snow fields during the Antarctic summer. 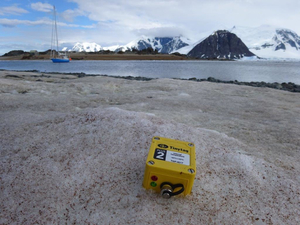 In a joint research project funded by The Leverhulme Trust, the Department of Plant Sciences at the University of Cambridge and the British Antarctic Survey (BAS) have been investigating the distribution and growth habits of snow algae. The team consists of biologists and geographers: at Cambridge, Prof. Alison Smith and Dr. Matt Davey lead the project with support and expertise in polar biology, with satellite remote sensing and logistics expertise provided by Prof. Pete Convey, Prof. Lloyd Peck and Dr. Peter Fretwell at BAS.

Snow algae live on snow fields, and in Antarctica they may well be the most abundant primary producers on land. Despite their ecological importance however, knowledge of their distribution and growth habits is limited to a few locations. This project uses remote satellite imagery, coupled with measurements in the field, to estimate the area and biomass contributed by snow algae in several Antarctic locations. It will also carry out a detailed study of the genetic variation of these algae, and the composition of bacteria and other organisms found associated with snow algal communities.

The project has two complementary objectives. First, to estimate the large-scale biogeographic distribution of snow algae, using satellite remote sensing, and by field biomass and carbon sequestration measurements. Second, the patterns of genetic and metabolic diversity in native communities of snow algae will be determined. The first objective will provide the first estimate of the overall contribution of snow algae to the carbon budget in regions of Antarctica, whilst the second will demonstrate the extent of endemism, and determine whether community composition affects the productivity of snow algae.

Data analysis is ongoing, however the Team has begun to identify when the buried loggers became exposed to the surface as the snow melted, indicated by the diurnal temperature variation increasing substantially. They could also see when large snow fall events occurred. Both of these events seem to correspond with bloom activity and distribution.

Dr Davey confirms "We chose Tinytags as they were lightweight and brightly coloured for retrieval They were robust enough to endure not only the environmental conditions and range of temperatures, but also being sat on by birds, elephant seals and covered in various animal faeces…after cleaning and decontaminating, the data was downloaded within minutes in the office at the polar research station using the easy to use software."

Gemini Data Loggers was very pleased to be involved in the project. Loggers in the Tinytag Plus 2 range are robust enough to be left to record accurately in such harsh and remote locations - as the challenge of the conditions experienced in this Antarctic environment has shown!