Rugged Tinytag Plus 2 data loggers were deployed in maritime Antarctica to monitor the effects of warming surface soil temperatures on the growth of cold-adapted decomposer fungi.

As our climate changes, rising temperatures are having untold effects on the Earth’s ecosystems. A team of researchers from the British Antarctic Survey (BAS) have used Tinytag data loggers to investigate how increasing temperatures in maritime Antarctica could impact the growth of a decomposer fungus that inhabits Antarctic soil. 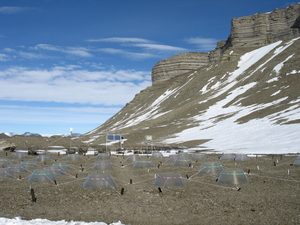 As a decomposer fungus, P. roseus plays a crucial role in its soil ecosystem by breaking down organic compounds and releasing nutrients that can be absorbed by plants and other soil microbes. Changes to its ability to metabolise efficiently, caused by warming soil temperatures, could create a chain of consequences for the terrestrial ecosystems that depend on it. As part of the research by BAS, surface soil temperatures were measured using Tinytag temperature data loggers to enable the researchers to identify whether further increases in temperatures could have adverse effects on P. roseus and the soils that it inhabits.

The field experiment was established in 2007 at Mars Oasis, an Antarctic oasis on Alexander Island in the southern maritime Antarctic. 64 circular plots were delineated on an area of soil in which the abundance of P. roseus was measured. Different treatments were applied to the plots: half were covered by open top chambers, and a number of plots received carbon and nitrogen in the form of three substrates and/or an increased water supply.

Soil temperatures were measured for three years from December 2009 to December 2012 using Tinytag Plus 2 TGP-4017 data loggers. The data loggers were buried 10-15 mm below the soil surface in three chambered and three bare plots. Temperatures were recorded at a depth of 25-30mm by the loggers' built-in sensors.

The data loggers were calibrated each year using Gemini Data Logger's calibration service to ensure optimum measurement accuracy across the entirety of the three-year temperature-monitoring period. During yearly visits to the site, the research team camped on a nearby glacier, until pick-up from one of the British Antarctic Survey's Twin Otter Aircraft (pictured).

Kevin Newsham, from the British Antarctic Survey, was pleased with the performance of the robust outdoor data loggers in this hostile environment. "With hourly measurements, the battery life of the TGP-4017 is well over a year, enabling its use in remote and inaccessible environments, such as the site at Mars Oasis" said Kevin.

The research has been published in a report titled "Inhibitory effects of climate change on the growth of extracellular enzyme activities of a widespread Antarctic soil fungus". The findings suggest that, combined with increased organic carbon and nitrogen inputs from expanding plant populations and enhanced water availability resulting from increased precipitation, snow melt or localised flooding, further warming of maritime Antarctica as a result of climate change is likely to inhibit the growth of P. roseus, and, by extension, other cold-adapted microbes.

Given that soil temperatures of +19°C have already been recorded at the research site during summer, the report suggests that surface warming of only a few degrees Celsius, as anticipated by climate models, will cause detrimental effects to the ecosystem at Mars Oasis and across other similarly affected cold climate regions.

You can read the report in full here.

Want to find out more about climate monitoring in Antarctica? Check out our case study from 2018 on how BAS used Tinytags to monitor Antarctic algal blooms.