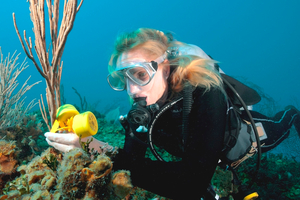 Tritonia Scientific Ltd. provides specialist diving support for underwater scientific research projects, either university-based programmes or in support of government agency science. Tritonia has used Tinytag Aquatic 2 data loggers for many years, using divers to deploy and retrieve these loggers as it removes the need for buoyed lines rising to the surface which could be pulled up or run over by mistake.

The recorded data has been used in numerous studies across a number of scientific disciplines. Aquatic temperature data is important for understanding how ecosystems function and the long-term consequences of anthropogenic drivers, for example, the steady rise in greenhouse gas emissions, and dynamic changes in temperatures. The monitoring takes place over a number of time phases and at different depths depending on the nature of the study, but some of the studies are now yielding long-term time series of over 20 years.

Typically, the data loggers are used to verify seawater temperature proxies. An example of this is the long-lived mollusc Arctica islandica which is used by scientists to generate time-series using their growth rings. Tritonia's temperature datasets can be used to match the modern growth rings against known temperatures. Another use is to deploy the loggers over a latitudinal range to generate temperature profiles against which scientists can compare the growth rates of subtidal kelp species in order to predict what the future impacts may be of warmer seas around the UK.

The data loggers monitor the changes in seawater temperatures at different depths, typically 10, 20 and 30 metres. Monitoring intervals on the long-term time series are set to either 10 or 12 minutes. Most of the data loggers used on the long-term monitoring have been deployed off the west coast of Scotland, but they have also been used on short-term experiments in the tropics and in both Polar Regions. The loggers are deployed in pairs just in case of any losses or failures.

Martin Sayer is Tritonia's Managing Director and has used Tinytags since the mid-1990s when they were the first product that provided the capability of long-term temperature monitoring at low costs. He comments, "We have simply stayed with the product because of its reliability. The latest versions are easy to use and are very resistant to being used in such a challenging environment. They provide a reliable and cost-effective way of generating high quality subtidal temperature datasets."

Cathy Clark from Gemini Data Loggers added, "It's great to know how the Tinytags' reputation for quality and reliability is so clearly demonstrated by their use over so many years in such a range of interesting and valuable research."

The photograph shows a diver deploying the loggers for a study in Belize.

The pdf shows a graph of a long-term monitoring dataset from the seawaters around Saulmore, Scotland.