Non-native species (also referred to as introduced species) are species which have been introduced to a new environment by human activity. Tinytag Aquatic 2 data loggers are used to monitor seawater temperatures to assess how temperatures affect non-native populations at Orkney, an archipelago off the coast of Scotland. 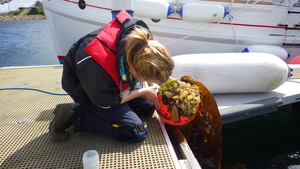 At Orkney, an archipelago off the northern coast of Scotland, a continuous non-native species monitoring programme is in place and forms a crucial part of marine conservation efforts.

Orkney's waters are often used for marine transport, and the impact of ballast water discharges on the spread of non-native organisms in local environments is of international concern. Monitoring for the presence of non-native species helps Orkney Islands Council Harbour Authority adhere to their Ballast Water Management Policy and protect the local ecosystem.

Monitoring and recording seawater temperatures plays an important role in the monitoring programme at Orkney, and when trustworthy data and reliable measuring devices are paramount to scientific integrity, the Harbour Authority needed a temperature monitoring solution they could count on. Tinytag Aquatic 2 TG-4100 underwater temperature data loggers were chosen by the Harbour Authority as their solution after they were recommended by colleagues. The data loggers are specifically designed for underwater applications and are fully submersible to depths of up to 500 metres, making them ideal for marine investigations.

The Harbour Authority's six Tinytag Aquatic 2 data loggers are deployed in Scapa Flow and at three marinas at Kirkwall, Stromness and Westray. The loggers' long battery-life and large reading capacity has significantly benefited the programme, as the data loggers in Scapa Flow and at Kirkwall and Stromness marinas are left in-situ year-round until they are collected and data is offloaded. All of the data loggers are set to record temperature values every 30 minutes so that the Harbour Authority can gain a full picture of seawater temperatures, their patterns and fluctuations.

Dr Jenni Kakkonen, who leads the Harbour Authority's Marine Environmental Unit, is pleased with the performance of the loggers. "The loggers have been ideal for what we need in terms of monitoring sea surface water temperatures," says Jenni.

Jenni has been particularly impressed by the durability and reliability of the data loggers; the loggers used at Kirkwall and Stromness marinas have been deployed since 2015 and have continued to perform reliably over five years. "We know we can rely on the data collection and the results when we come to retrieve the loggers and offload the data either at the marinas or on board the vessel," comments Jenni.

Temperature data was also included in a 2019 research article titled 'The value of regular monitoring and diverse sampling techniques to assess aquatic non-native species: a case study from Orkney.' The investigation demonstrated the continued presence of non-native species in Orkney waters over several years and identified the most significant invasive organisms. It is hoped that the report will continue to encourage regular non-native species monitoring in other waters. You can read the full article here.