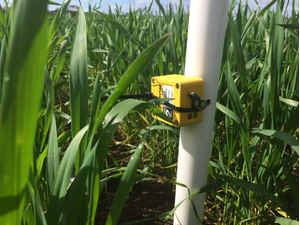 Tinytags data loggers are playing a not-so-tiny role in Australian frost research. The Department of Primary Industries and Regional Development (DPIRD) is a key partner in the Grains Research and Development Corporation's (GRDC) National Frost Initiative (NFI). The NFI aims to provide the Australian grains industry with targeted research, development and extension solutions to manage the impact of frost and minimise seasonal profit variability. Frost has been estimated to cost Australian growers around $360 million in direct and indirect yield losses every year.

Frost can affect crops in several complex ways but to put simply frost damage will start to occur when temperatures in the paddock drop below 0°C. At these temperatures physical damage occurs to the reproductive parts of a plant which affects the overall yield and quality of the grain.

Gemini's Australian distributor, Hastings Data Loggers, has supplied 500 - 600 Tinytag Plus 2 TGP-4017 data loggers which are used annually across 20 - 30 research sites around Australia to record crop temperatures. Specifically, temperatures are logged at 15 minute intervals, with the recorded data helping to determine treatment effects on frost severity and duration. A frost event is defined as having taken place when at least one temperature logger records a zero or sub zero temperature. The lowest minimum temperature for each logger is recorded and presented as frost severity. Frost duration is analysed by summing the total hours below different temperature thresholds (0, -1, -2, -3, -4, -5 and -6°C). The treatments being investigated include the effect of stubble loads, susceptibility of crop types, varying plant densities and time of sowing and nutrition.

Depending on the trial, each plot has one to three Tinytags placed in each plot. As the crop grows, the loggers are raised at 100mm increments so they are always at the top of the canopy/ boundary layer (at the coldest point in the canopy). They are installed at the end of July and remain there until November. At some research sites soil temperatures are required. The Plus 2 loggers are installed in both the inter row and plant row for comparative temperature measurements with 50mm of soil covering the logger, and plenty of flagging tape attached to ensure they are easily found.

Once the temperature data is analysed, the research outcomes are communicated to industry (growers and farm advisors) so they can develop comprehensive frost management strategies, potentially minimising yield loss due to frost.

Dr Ben Biddulph is a Research Officer for the Department of Primary Industries and Regional Development. He comments, "We chose Tinytags as they are robust, reliable and have a suitable accuracy and temperature response time for our field trials. Just how robust was tested when a logger accidently went through a commercial harvester, but the important temperature data was still salvageable with the help of Hastings technicians! The software is efficient and easy to use and as we have many different research collaborators programming, deploying and downloading a large number of loggers, simplicity is key to minimising human error. The speed and ease of data processing with the bulk offload tool is also useful as we download temperature data fortnightly for three months."

Tinytags are pivotal to the frost research as they have enabled the DPIRD frost team to quantify change in frost severity and duration due to various agronomic treatments in a replicated manner and with the resolution required to pick up small (0.5°C) temperature differences between treatments. Other logging options looked at did not allow such simple deployment, replicated temperature measurements or the same level of accuracy. Although there has been a significant investment in the initial purchasing on the Tinytags, the robust nature and simplicity of servicing and battery replacement means the cost per year of use is acceptable, and they have currently been running for four seasons with a very low failure rate. The Tinytags will remain a valuable asset and research tool in agronomy trials for several more years to come.

Ben concludes, "We have been very happy to recommend them to other agricultural researchers interested in understanding frost damage in their trials. One of the key findings of our research over the past five years would not have been definitive without using Tinytags. We have found that stubble retention in our broad acre cropping system is increasing; frost severity, duration and subsequent frost damage (Smith et al 2017). Based on this information, growers are now more actively managing stubble loads in frost prone areas to reduce the effect of frost on their cropping programs. In the particularly devastating 2016 frost season in Western Australia this more active stubble management has been estimated to have reduced frost damage and returned in the order ~$80-240M to WA growers.