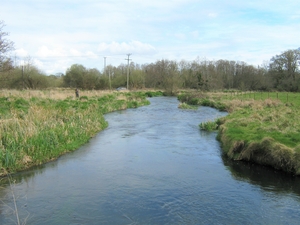 Inspired by the Environmental Change Network, with freshwater and terrestrial sites spread out all over the UK, freelance Freshwater Biologist John Davy-Bowker set up the River Lab Long Term Monitoring (RLLTM) project in Dorset. John's project focuses on two chalk streams which flow independently and discharge into Poole Harbour: River Frome and River Piddle. Monitoring two sites close to each other makes it easier to see patterns from the data in relation to temperature to determine a common denominator (i.e., weather) in macroinvertebrate communities.

At 14 years old, the RLLTM project is still in its early stages. The goal for the coming years is to continue to gather high-quality data for an extended period. However, some of the data has also contributed to other projects, such as Marsh et al's 'Warm winters and cool springs negatively influence recruitment of Atlantic salmon (Salmo salar L.) in a southern England chalk stream.' Temperature data from the RLLTM programme was used to "calculate the mean water temperature during spawning and emergence."

It can be difficult to sustain long-term monitoring projects using the same equipment - durability and quality are very important. At the start of this project almost 14 years ago, many freshwater biologists were still using traditional recorders with probes in the water and the device to the side of the river. This was not convenient and users often struggled to calibrate the equipment.

John instead chose Tinytag Aquatic 2 loggers because they are robust and submersible, ideal for being underwater for a long time. John adds, "The long battery life and robustness mean that I can confidently leave the loggers in place for a whole year with no concerns. I often think of them ceaselessly recording the river temperatures while I'm snug and warm having my Christmas dinner!"

There is a convenient pillar on top of the logger to secure a shackle or seizing wire, stopping it from coming away underwater. There can be a lot of stress on underwater devices due to the varying weather and river conditions, but there is no need to worry about the Tinytag Aquatic 2 loggers being damaged, torn off, or washed away.

Another reason John Davy-Bowker chose Tinytag data loggers for the River Lab Long Term Monitoring Project is due to Gemini Data Loggers' certificated calibration service, traceable to national standards. John comments, "the calibration service is fantastic. We download the data every year and then send the loggers off for calibration. We receive the loggers back with a certificate to prove the readings, fresh batteries installed, and new sealants, all ready to go again!"

Most of the rivers' temperature readings fall between 5°C to 15°C. John praises the off-the-shelf calibration service measuring at points 0°C and 30°C, however, he typically uses our custom calibration service to receive 7 points of calibration, in 5°C increments from 0°C to 30°C, for greater confirmed accuracy. This gives him reassurance that all of his loggers are running well and providing the best possible data.

Impressed with the quality and durability of the loggers, John would "highly recommend Tinytag data loggers to any environmental scientists looking to record water temperature. They have served me very well for 14 years and I intend to continue using them for the foreseeable future."